First and foremost, seeing m-flo’s video for Love Comes and Goes was a good reminder of why I assembled Hybridity in the first place. Frequent collaborators Emi Hinouchi, Ryohei Yamamoto, Emyli, Yoshika, and former member Lisa can be seen singing and walking around this meta-TV station set. The song itself is from their latest greatest hits album: Award SuperNova: Loves Best. I’ve been wanting to share some thoughts on it since I first saw it.

My homey Matt Lopez, a Latino, introduced me to m-flo’s Expo Expo album almost 10 years ago. My interest in hybridity and identity can be traced back to my obsession with Lisa (AKA Elisabeth Narita). When I found out that she was half-Colombian and half-Japanese it changed the way I looked at the world.

I’ve always been in awe of Verbal and Lisa’s ability to code-switch with such ease. As a Chicano, I’m fascinated at how the ability to code-switch affects the way we see ourselves in relation to other Chicanos and Latinos. My experiences in life in having only a pocho’s grasp on Spanish and being able to “act right” have been two of the most influential elements of my self-image.

In terms of how they pull off their code-switching, it’s almost seamless. Take a look at this video and see how easily all of the singers drop English into the mix and then take a look at a reggaeton video and the awkward stiffness of the singers yelling lines like “Baby! I love you! Te quiero!”

I’m not exactly a fan of Lisa’s solo work but whenever she collaborates with m-flo, she kills it. I’ve never heard her sound this intense in a song before and her gaze is haunting. Her look in this video is a huge departure from her early videos with m-flo. During their days as a trio, Lisa often rocked an androgynous look. I always thought it went well with her role in the group, the hooks and choruses she sang were ultra-femme but her rapping was distinctly androgynous. When I first heard her rap on How You Like Me Now? I didn’t make the connection that the second rapper (I get around like sushi on a kaiten!) was also singing the chorus. There’s no trace of that left in her S&M makeup artist outfit in Love Comes and Goes.

Seeing all of m-flo’s friends and collaborators assembled together makes the experience of the video almost melancholy. Maybe it’s the song or maybe it’s my associating sentimentality with a sense of loss and longing. It’s definitely a passing of the torch between Lisa and m-flo’s youngest collaborator Emyli. I’ve been following her blog for about a year now and it’s a curious documentation of her life as both a student and a singer on the verge of superstardom (she blogs in English). Aside from being a tenderoni if there ever was one, Emyli is an interesting hybrid astronaut herself. Her last single, Tekito Lover was an English/Japanese code switching song and the CD single also included her singing the b-side song Look at Me Now in Spanish. It may be crass marketing or a gimmick but I give Emyli her due for reaching out to a new audience. 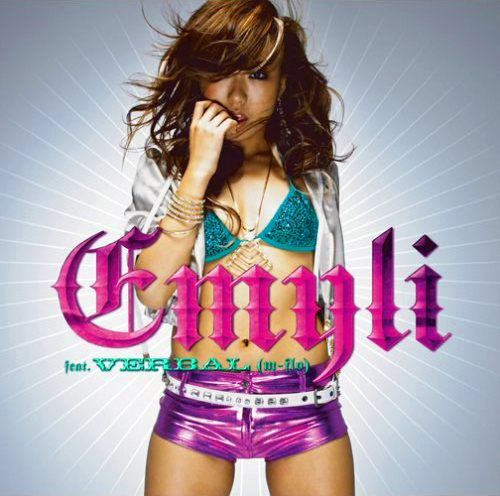 This is the cover of Emyli’s Tekito Lover single (available for purchase via itunes in the United States). Are the cholo font and Virgin of Guadalupe star burst background just a coincidence? I’ll leave it up to you.

Ps. The green guy from the Love Don’t Cry video is in Love Comes and Goes! I busted out laughing when I saw him walk out of the elevator. Verbal gives him a shove at the very end for good measure!