I was interviewed this weekend by Alejandro Paz for Anygüey and it was just posted today. I do intend to keep my word and design a tattoo for Alejandro. More on that story as it develops.

Yesterday Mariela and I ventured to Japantown, our first trip there in years. Rene and I go to the Kabuki theater all the time but we rarely go into any of the shops these days. I had been dying to check out New People, a brand new shopping center that recently opened. New People was launched by Viz Media; for those of you that don’t know, I actually used to work for Viz and their publication Animerica way back when. It’s crazy to think that the small company of about 20 that I started working with is now an expanding media empire.

The most fascinating shop at New People was BABY, the Stars Shine Bright the first flagship store of the Japanese Lolita Fashion brand. I had only seen Lolita fashion through magazines & computer screens and seeing a store full of these clothes was like being in a surreal movie set. What really caught my eye was a $38.00 tote bag from the store’s Alice and the Pirates line that featured the image below. 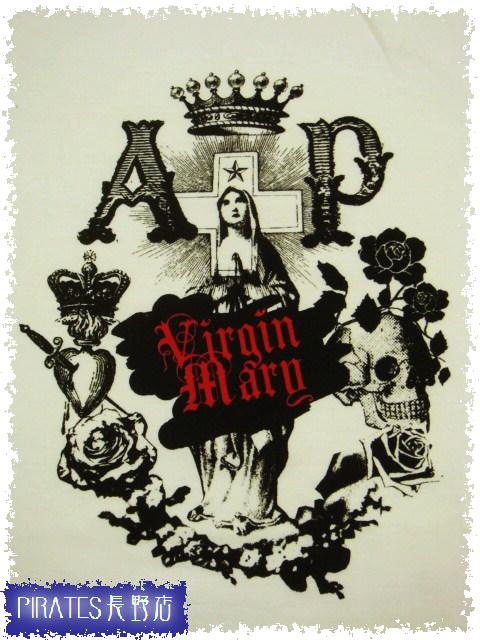 An image of the Virgin surrounded by a bleeding heart, roses, and a skull. This was very clearly not a Catholic motif but a reference to Chicano pop sensibilities. Is this a sign of things to come in Lolita fashion?

Mariela and I then walked over to the Kinokuniya building and quickly discovered pikapika. pikapika is a store with nothing but Japanese Purikura photobooths (about 10 in total I think). The place was closing soon and Mariela and I had just enough time to hop into a Love Joker booth and take a set of photos. I used to love Purikura booths as a teenager but DAMN, the technology has improved since then. The ring of diffused strobes that surround the touchscreen menu of the booth were impressive. After our shoot we were led to another section of the booth where we could decorate and draw on our photos using wacom-like pens. All the text of the machine was in Japanese but pikapika has helpful translation charts posted on the machine. The end result of our picture taking and decorating was printed out on a 4×6 sheet of sticker paper.

Making the photos was a fun experience and at $10.00 a pop, it wasn’t cheap but it was well worth it. My mind is now spinning with thoughts of curating an art exhibit of artists who create portraits of themselves with purikura booths. With all the machines at pikapika, there are endless possibilities for artists to create amazing images using them. If anyone is interested in participating in or hosting such an exhibit please let me know.