At long last my top-secret collaboration with artist Maya Escobar can be revealed. Our artist statement follows the images. Big ups to Carianne Noga for helping Maya and I get this project going.

Acciones Plásticas プリクラ is a collaboration between St. Louis based artist Maya Escobar and San Francisco based artist Rio Yañez.

Maya Escobar is a Guatemalan-Jewish digital media and performance artist, currently living in St. Louis.  Her work addresses issues of cultural hybridity, gender, placelessness, and the construction of identity. Rio Yañez is a Chicano curator, photographer, and graphic artist based out of San Francisco. His work utilizes and challenges Chicano mythology and visual iconography.

In Acciones Plásticas Escobar created a multi-faceted “doll” by assuming the role of designer and distributor, and even posing as the actual doll itself.  Each doll was a satirical characterization of some of the many roles that have been projected upon her, and into which she has, at points, inevitably fallen. In conjunction with these images, she developed a short series of low-definition youtube video blogs through which she inhabits the lives of “real women” who have each been visibly defined by societal constructs.

Recently, Yañez has been utilizing Japanese photobooths (known as Purikura or “print-club”) as an artist’s tool for creating portraits. These booths are much more common in Japan than their United States counterparts. As a catalyst for creative expression and social interaction they are used primarily by young urban Japanese girls. A standard feature in all Purikura booths allows the user to digitally decorate their portraits after they take them. The options are vast and include wild characters, excessive starbursts of light, pre-made phrases and the option to draw your own text directly on the image. Purikura gives the subjects near-divine powers of self-expression in crafting their own portraits.

The two artists who met over the web, decided to bring together Escobar’s highly charged and evocative Acciones Plásticas characters with Yanez’s notorious Chicano graphic-art style and new found obsession with Purikura images, as a way of addressing the construction of Latina identities.

Maya posed as The Latina Hipster: a bad-ass Morrissey-lovin’, tuff-girl sexy chica; The Latina Role Model: a diploma totin’ intellectual, sexy, social media goddess; and finally, The Homegirl: a hybridized version of Escobar’s Midwestern Chach (or Chachi Mama) and Yañez’s West Coast Chola, who sticks up her middle finger in what appears to be an act of defiance, but really is her protective shield.

Maya sent digital images to Rio, who in turn drew portraits of her as each of these constructed identities, approaching each portrait with a Purikura sensibility and decorating them each as the characters represented might accessorize themselves. The final series of portraits is the result of negotiating multiple identities and influences. Guatemalan, Jewish, and Chicano sensibilities reflected back through a Japanese Purikura aesthetic. Acciones Plásticas プリクラ challenge and question the thin line between archetype and stereotype. The Purikura elements present the novel signifiers of each social construct represented in the series.

This collaboration is the first of many to come as Maya and Rio explore the commonalities and differences of their cultural identities. 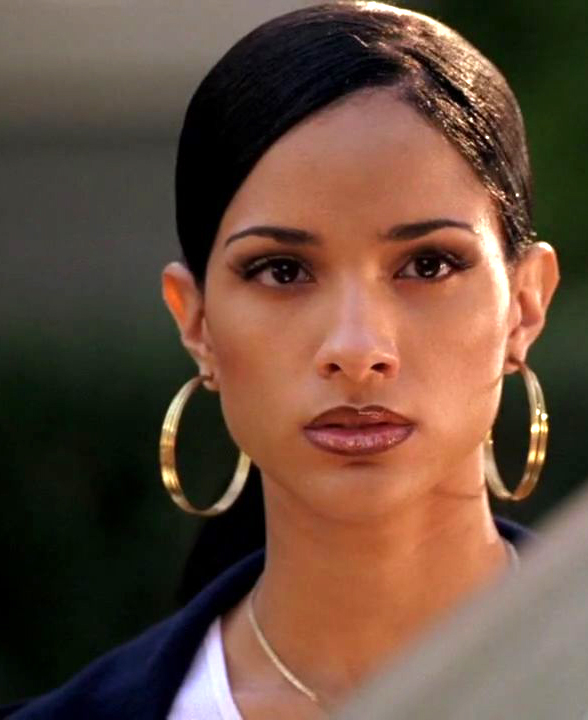 My most recent Blu-Ray purchase has been the first season of Terminator: The Sarah Connor Chronicles. I’ve been really digging the series and I think Summer Glau is a brilliant actress in it. As much as I like the series it’s hard to turn a blind eye to the monolithic portrayal of Latinos throughout the first season. Every single Latino male has been shown to be a lying, backstabbing cholo. I mean that literally, our ONLY onscreen depictions are as ruthless cholos in the show. The message of Terminator: The Sarah Connor Chronicles is clear: Latino men are good resources for illicit goods and contraband but can’t be trusted. Even worse, all but one of them ends up killed by the end of the season. There’s only one Latina in the first season and her role in the show is just as simple but her context is a lot more complex.

The most fascinating aspect of Terminator: The Sarah Connor Chronicles is the presence of Chola; a (what else) chola who comes to the aid of Sarah Connor on multiple occasions throughout the first season. Chola is no ordinary chola though, in the first season she is totally silent and easily the most mysterious figure in the first season. There have been a lot of discussions online speculating that Chola’s stoic silence means she’s a terminator. In the commentary track of the season finale the episode’s Director implies that Chola is not a terminator by stating her motivation is simply to “avenge her homies.” Ultimately her silence serves to exoticize her. A silent, nameless Chola is more mysterious than Sad Girl talking about what nail salon she got her ghetto claws done at. Chola is the twisted, idealized antithesis to the portyals of Latinas and Black Women on reality television shows: silent, friendly, and doesn’t react to or question the violence around her. It’s different, I’ll give the series that much, but just as harmful and stigmatizing.

Chola is played by actress Sabrina Perez. Looking at Sabrina Perez’ IMDB page reveals that she’s been cast in five roles thus far in her career. Three of those five roles don’t even give her a name and simply refer to her as the archetype she portrays; they speak for themselves: Chola, Gang Girl, and Assassin. 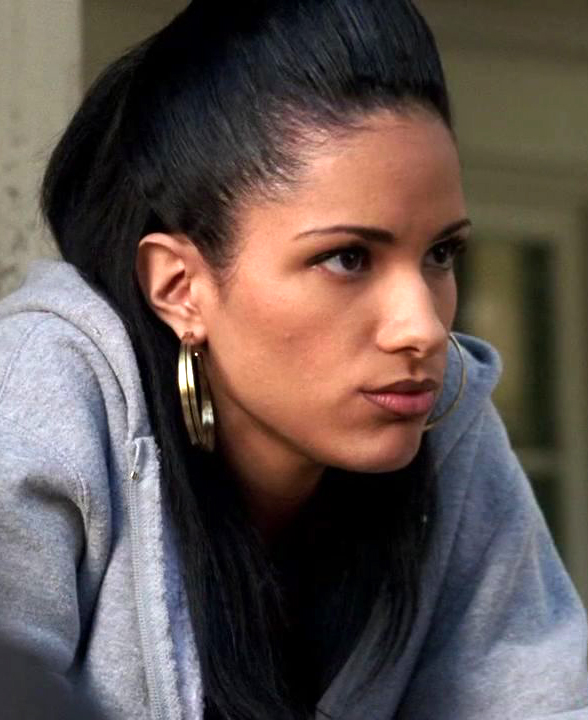 The question is: Are Latino and Latina performers who continually play these roles victims or villains? Is Sabrina Perez simply paying her dues while following her dreams to be a successful actress or is she a “Good German” not willing to question the implications of the roles she takes? At what point do we hold performers accountable for taking the meager roles that are offered to them by the mainstream entertainment industry?

The only other critical writing I’ve been able to find on Chola is this insightful post by a writer that goes by FengLiAn. I really am enjoying Terminator: The Sarah Connor Chronicles and I do hope Sabrina Perez can break through the glass ceiling she is being crushed against, for the sake of everyone stigmatized by her roles if not her. Keep ya head up Ms. Perez. 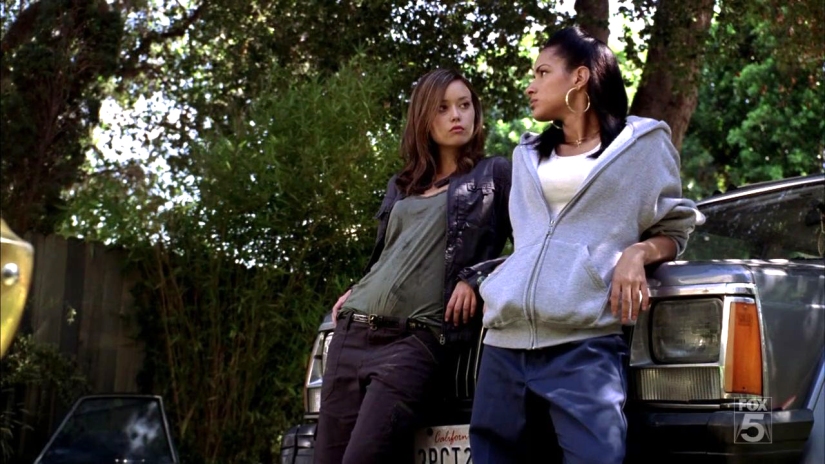 Yesterday Mariela and I went to see Fast and Furious. She’s a huge fan of Vin Diesel and I wasn’t about to miss any opportunity to see my homegirl Jordana Brewster on the silver screen (I fell madly in love with her after seeing her as international supercriminal Lucy Diamond in the movie D.E.B.S.). After seeing the film my mind was left spinning, there were so many images of Latinos to digest in Fast and Furious. I could write a book on the subject but I’m just going to break you off with something short and digestible.

The last Vin Diesel movie I saw was A Man Apart and after seeing Fast and Furious I can’t help but wonder if any other actor has been responsible for more on screen deaths of Mexicans than he. Both films have record bodycounts of snarreling Mexican drug dealers and anonymous thugs. Is there anyone who has murdered more Mexicans in their film career?

Fast and Furious portrays a fascinating swath of Latino images and quickly establishes what are “good” and “bad” Latinos. The “good” Latinos can be found in scenes taking place in the Dominican Republic and Panama. The music, language dialects, landscapes, and women of those countries are fetishized, objectified, and held up as an example of what is ideal and somewhat innocent.

On the other end of the spectrum are Mexicans, both in the United States and Mexico. They are the “bad” side of Latinos, corrupt, ruthless, back-stabbing, and dirty drug dealers. From the unnamed cholo that Paul Walker hunts down and brutalizes in the beginning of the film to the Mexican main villain and his gang of generically evil and greasy henchmen. The audience is pumped-up to cheer every evil Mexican that dies in a fiery car crash or at the end of a bullet fired by Paul Walker.

Personally, the most heartbreaking element of Fast and Furious is that it’s directed by Justin Lin. In the interviews I’ve read with him he has spoken with much self-awareness and acuity on his experiences as an Asian in the film industry. He was a participant in the documentary The Slanted Screen which critically analyzed images of Asian-American men in Hollywood. He even graduated with his masters from UCLA for crying out loud! If there would be anyone who should know better it’s Justin Lin. Fuck!